During August, 2019, I documented all the Austria’s federal states and the impact climate change has already had on them. From the Alpine pastures, to melting glaciers, to deep woodland, flatland, farm lands, lakes and the cities.Effects of climate change are already seen on micro-macro basis.

see it here
Effects of climate change are already seen even on a tiniest micro basis.
The climate crisis is one of the biggest challenges of our time. The high consumption of fossil fuels like oil and coal are turning the Earth into a massive greenhouse. Already today the effects in many regions of the planet are clearly noticeable.
The reasons for global warming are very well known; and these climate-damaging greenhouse gases have
been rapidly increasing since the beginning of industrialization. Especially the concentration of CO2 has been in the atmosphere since the mid-19th century enormously increased: from 280 ppm (parts per million) over 400 ppm. This rise is almost exclusively man-made. It came so far, we can call it “The climate crisis”.
It has also reached a small but very diverse central European state of Austria.
The average temperature in Austria has risen by two degrees Celsius since the start of the records in 1880. In comparison: Globally the rise of temperature is at about one degree Celsius. Global warming particularly affects Austria's sensitive, alpine climate. The CCCA (Climate Change Center Austria) has analyzed the effects of the climate crisis on each of the individual federal countries in detail. Some of the forecasts and effects to be expected in a business-as-usual scenario (without reducing the Greenhouse gas emissions) as well as in a very moderate Climate protection scenario (reduction of greenhouse gases by half to 2080) are: Falling water tables, rising of the forest line, immigration and displacement of native species with alien species, decline in soil quality do severely threaten our ecosystem. The glacial melt and its effects, cracking of the permafrost, the Austria-wide spruce die-off due to infestations, forest fires and drought are symbols of the climate crisis and already part of our everyday life in Austria. Also particularly affected is agriculture, due to the increase of extreme weather events - such as heavy rain, hail or drought. Heavily affected is also winter tourism, through the decrease in snow reliability and the rising
of the snow line, which by the end of the century is forecasted to rise by 300-600 meters upwards.
The diversity of the domestic landscapes is Austria's highest good and contributes decisively to uniqueness of the country. The ecological diversity is great and from state to state and characterized by unique ecosystems, landscapes and the culture itself.

Night shot of one of the fastest retracting glaciers in Austria, Schlatenkees. Climate change
and rising temperatures means the end of the Alpine world as we know it. Alpine landmarks,
ancient ice with all it's history inside is melting away faster than ever and without immediate
reduction of greenhouse gas emissions will be lost in just a couple of decades.
Location: Schlatenkees, Tyrol, Austria

Snow Farming at Stubai glacier
Snow farming intends to "save" the snow from melting in the summer months.
Therefore it often gets covered by 'blankets', made out of tough material in white color to
reflect as much of the sunlight/heat back and preserve the ice from melting.
The idea is to save up to 60-70% of the remaining ice. But only part of glaciers that are
commercially usable and used as skiing areas are protected by these measures. Where
there is no commercial value, glaciers are non-protected.
Locaton: Stubai glacier, Tyrol, Austria

Snow Farming at Stubaier & Stubai glacier
In front end we see ski resorts protected by snow farming, in the background we see the
Zuckerhütl (Sugarloaf) which is at 3,505 metres the highest peak of the Stubai Alps and lies
at the southern end of the Stubaital Valley. Natural glacier, although beautiful it is left
completely unprotected due to commercially not interesting properties.
Location: Stubai glacier, Tyrol, Austria

Bark beetle infestation
Bark beetles are causing massive forest damages in Austria. The bark beetle is mainly
attacking the spruce trees. They make up a big part of the Austrians forests, as the spruce is
a fast-growing and economically attractive tree. However, the spruce is highly affected by
climate change. It can't adapt to the high temperatures and heatwaves and therefore is more
vulnerable to pests like the bark beetle. Forest rangers have to keep track of the damage
and fell trees as soon as they are infested.
Location: Oberösterreich, Austria

Bark beetle infestation
Gerhard B. is overviewing to a clearance where once stood spruce forest he was taking care
of. Small scale farmers are being especially affected by the bark beetle infestations. As it
may take away whole chunks of their woodlands which means heavy toll on their long time
income and lifestyle.
Location: Oberösterreich, Austria

Broken forest
Whole areas of fallen spruce trunks are becoming not a rare sight all over in Austria.
Due to weather extremes, more forests are facing environmental dangers. Especially storms
with strong winds have the power to destroy large parts of the forests. In addition, a lot of
forests are weakened by drought, illness and pests, making them even more vulnerable to
storms.
Location: Grosskirchheim, Carinthia, Austr

Torrents
Due to climate change, weather extremes are getting more common in Austria. Weather
events like heavy rainfalls, hail and heavy storms can be seen more frequently. In addition to
that soil, sealing is an increasing problem. Concrete areas are unable to take up water. The
danger of rockslide, mudflows and floods increases.
Location: Gossaubach river, Salzburgerland, Austria

Torrents
In summer 2019 the area of Tennengau was facing heavy rainfalls. Just a day of before
unseen that constant and heavy rainfall was enough that a creek became a fast flowing
torrent destroying everything in his path.Streets have been destroyed, bridges have been
torn apart and the valley village has been isolated from the outside world for several weeks.
Location: Tennengau, Salzburgerland, Austria

Torrents
Roads in Tennengau have been literally clean cut by the power of the water torrent.
Location: Tennengau, Salzburgerland, Aust

Flood protection walls
Due to climate change, weather extremes are getting more common in Austria. Especially in
the areas around the Danube river, large areas are in greater danger of unexpected floods,
that are causing massive housing damages and even deaths. The government is investing
heavily in flood protection. Just in the federal state Niederösterreich, 500 projects have been
implemented since 2002. Spitz near the town Krems was one of them.
Location: Spitz, Niederösterreich, Austria

Drying of the lakes
Austria's second-largest lake Neusiedler lake is threatened of drying up. The lake has
continuous water fluctuations since recorded for the first time in the 18th century. The lake
has dried out at least 100 times throughout history due to weather changes (drought and
heavy winds). However recently due to constant rise of the temperature and dryer summer
months ``vanishing" of the lake became a more constant phenomenon. The lake is the
closest "sea-like" body of water to Vienna, and therefore important culturally and
commercially.
Location: Neusiedler See, Burgerland, Austria

Drying of the lakes
Besides commercial and cultural value, the lake "Neusiedler See" is a rare and rich
ecosystem. The drying-up of the lake bed will cause major environmental disruptions. Many
animals and plants are threatened to lose their habitat, as well as the microclimate. Even
though today the water level is controlled by an artificial outflow, the Einserkanal, that stands
little chance in the expected future conditions.
Location: Neusiedlersee, Burgenland, Austria

Dying of Alpine pastures (Alms)
Alpine farming is very important for Austria, not just economically and touristically, but also ecologically. As of 2016, there were 8,100 Almen (Alpine pastures) in Austria, 525 of them are located in Vorarlberg.
The smallest state in Austria is also the largest of the local alpine pasture. As a general rule however, there is a decline in alpine pastures throughout Austria, 1986 there were about 944 Alpine pastures in Vorarlberg. The rising temperatures change pastures drastically. Higher climate is rising tree lines in the Alps and growth of alien bushes, trees and other plants in the Alms. The farm animals cannot cope with a 20 percent increase in the amount of feed and workload for farmers removing “new-comers” plants is overwhelming. The biodiversity of this sensitive ecosystem is under a threat of disappearance.
Location: Vorarlberg, Austria

Rising of the tree line
Due to the heating of the climate tree line is rising and has negative effects on biodiversity.
Picture was taken from the inside of a local B&B, whose owners say that only as little as 15
years ago ⅓ of the mountain seen on the picture was bare rock. Now, is already covered
with grass. And with new flora also comes the new fauna. Native species are going to lose
their natural habitat, they’ll have to either adapt, but there’s danger of settlement of new
predatory species who were living in lower areas due to the natural resources. Where once
was just rock, forming of soil will cause more triggers for mudflows and landslides.
Location: Obertauern, Salzburgerland, Austria

Formation of new lakes
Sulzenau See / Sulzenau lake is a newly formed glacial lake, which is becoming a trend due
to glacial melting elsewhere also. The Sulzenau See was a result of the heavy ice loss, it
appeared in 2003 as the glacier cracked and water flow changed its course completely
overnight.
Location: Sulzenau See, Tyrol, Aus

Death of glaciers
Federal state of Tyrol with it’s sensitive alpine environment is where heating of the climate is seen as the strongest and with the most immediate effects. In the next few years it will become increasingly noticeable. The state of Tyrol had 144km2 of glacier area in 1969, by 2006 it had been reduced to only 116 km2. In the period from 2006 to 2016, glaciers lost additional 20% of their ice mass. Without reducing greenhouse gas emissions - there will be a rise in temperatures in Tyrol by 2050 by about +1.3 degrees Celsius to +1.4 degrees Celsius, by the year 2100, there could even be a massive increase of +4.2 degrees Celsius. A reduction in greenhouse gas emissions in a very moderate climate protection scenario could lower the increase of the temperature to approx. +2.3 degrees Celsius.
Location: Sulzenau See, Tyrol, Austria

Death of glaciers
Cracks in detail of Gepatsch glacier which has lost 40 meters of depth in the last 100 years
(measurements: 2017/2018).
Location: Gepatsch, Tyrol, Austria

Cracking of the permafrost
Due to climate change permafrost areas, especially in the Alps, are melting. Permafrost has
the important function of keeping mountains stable. At the weather station Sonnblick
(3106m) this had already severe consequences. Average temperature has risen already
above 1.5 degrees Celsius. Already 10 years ago structural measures had to be taken by
building concrete blocks to prevent the mountain and therefore the observatory from falling
apart.
Location: Sonnblick, Salzburg, Austria

Death of glaciers
Due to the fast melt, water drips through and under the glaciers which is speeding up the melt from below.
Crevasses are indicating a basin, the basin indicates thin ice, suggesting this section of the glacier will soon be lost... Schlatenkees glacier (3670 m – 2350 m), is one of the fastest retracting glaciers in Austria. -67 meters of depth in the last 100 years.
Location: Schlatenkees, Tyrol, Austria

Death of glaciers
It does not matter so much how much snow falls each winter, but when. And recently, snow comes much later in the year and therefore it has no time to settle in the old ancient ice, instead that with faster rise of temperatures inspiring it actually helps melting it, which causes a chain-reaction as the melting of new snow carves the way through the glacier and speeds up the melting of the glacier itself. Glaciers are the cherry on the top of the Alpine world, and now more than ever we are closer to the point of no return of losing them.
Location: Schlatenkees, Tyrol, Austria 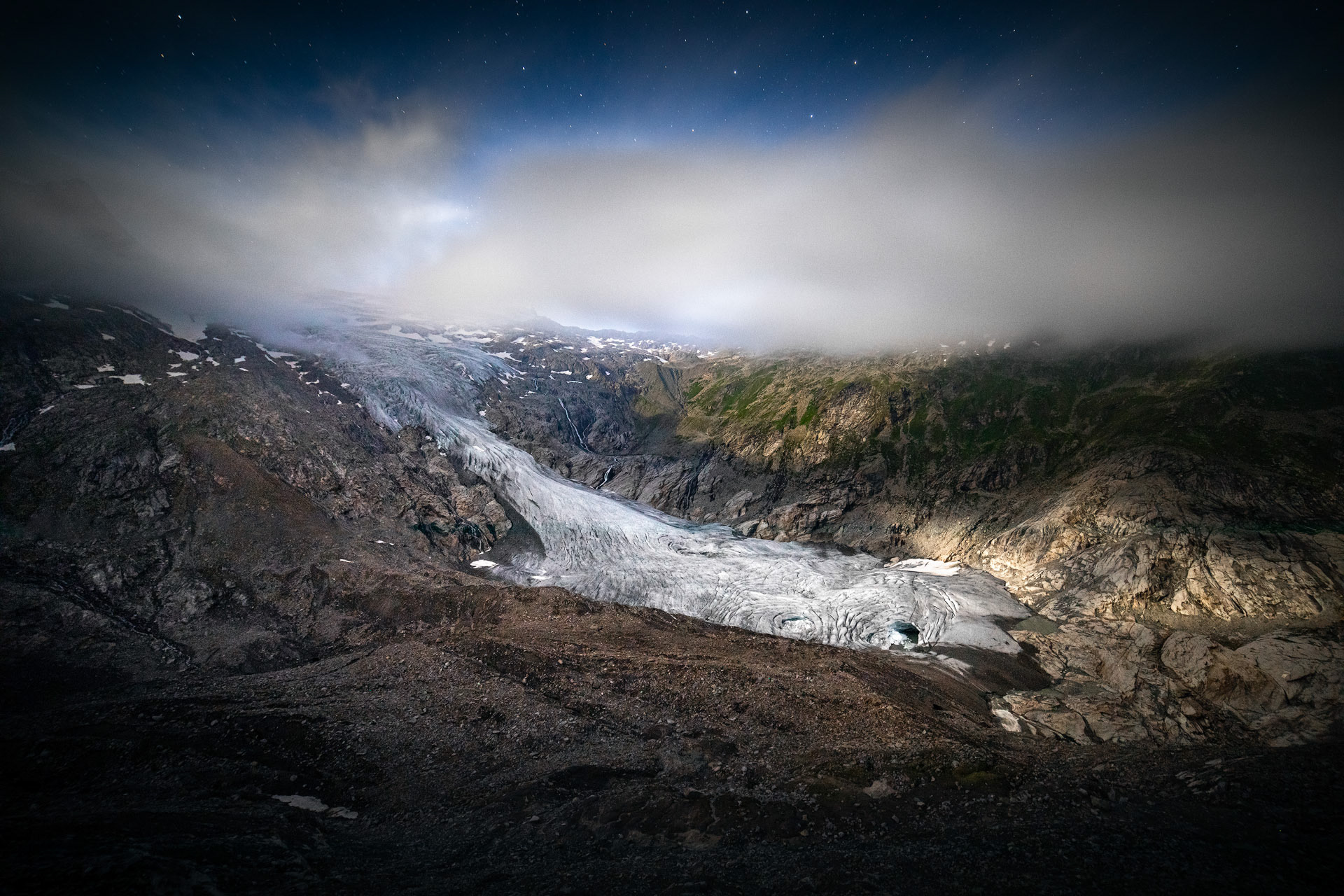 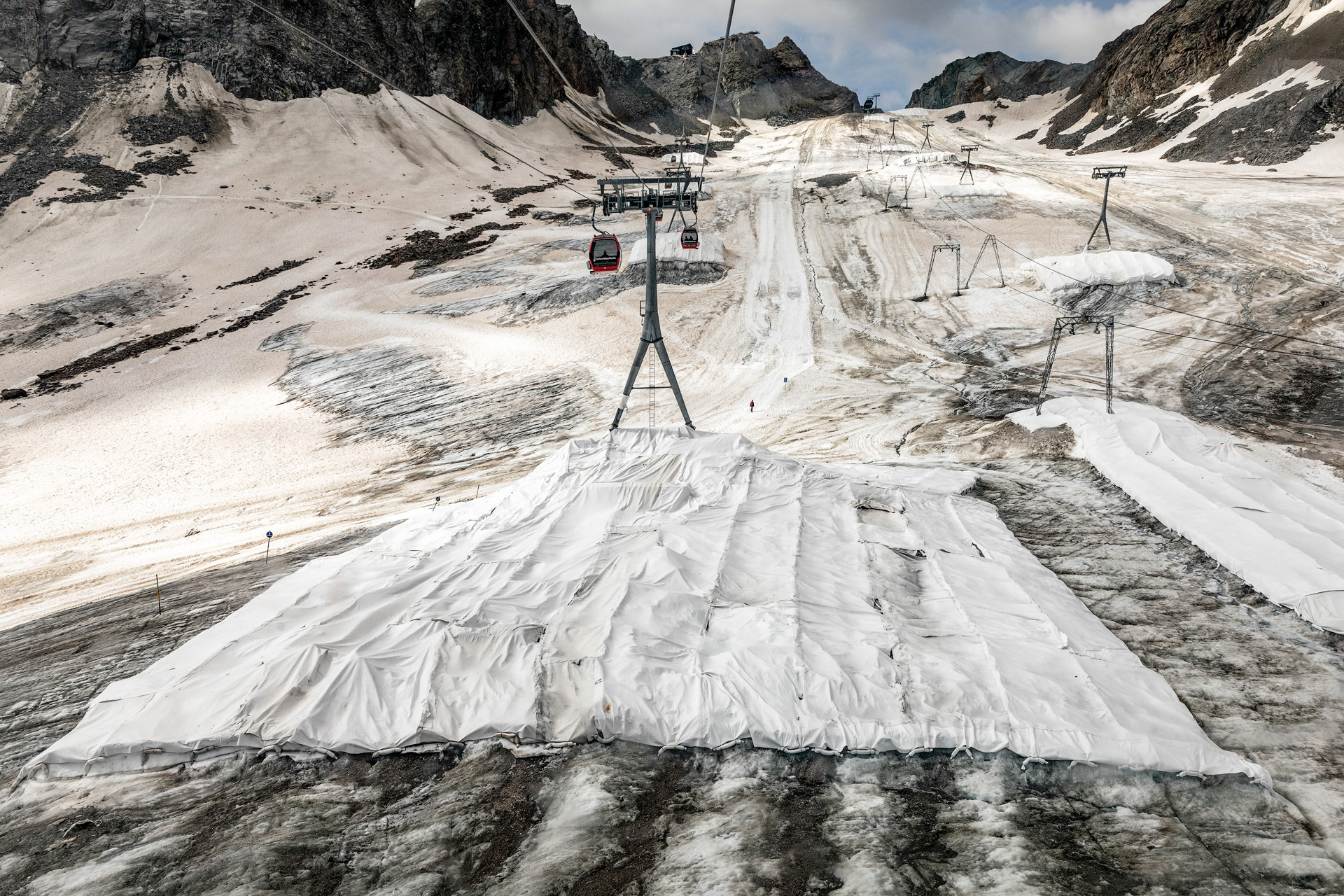 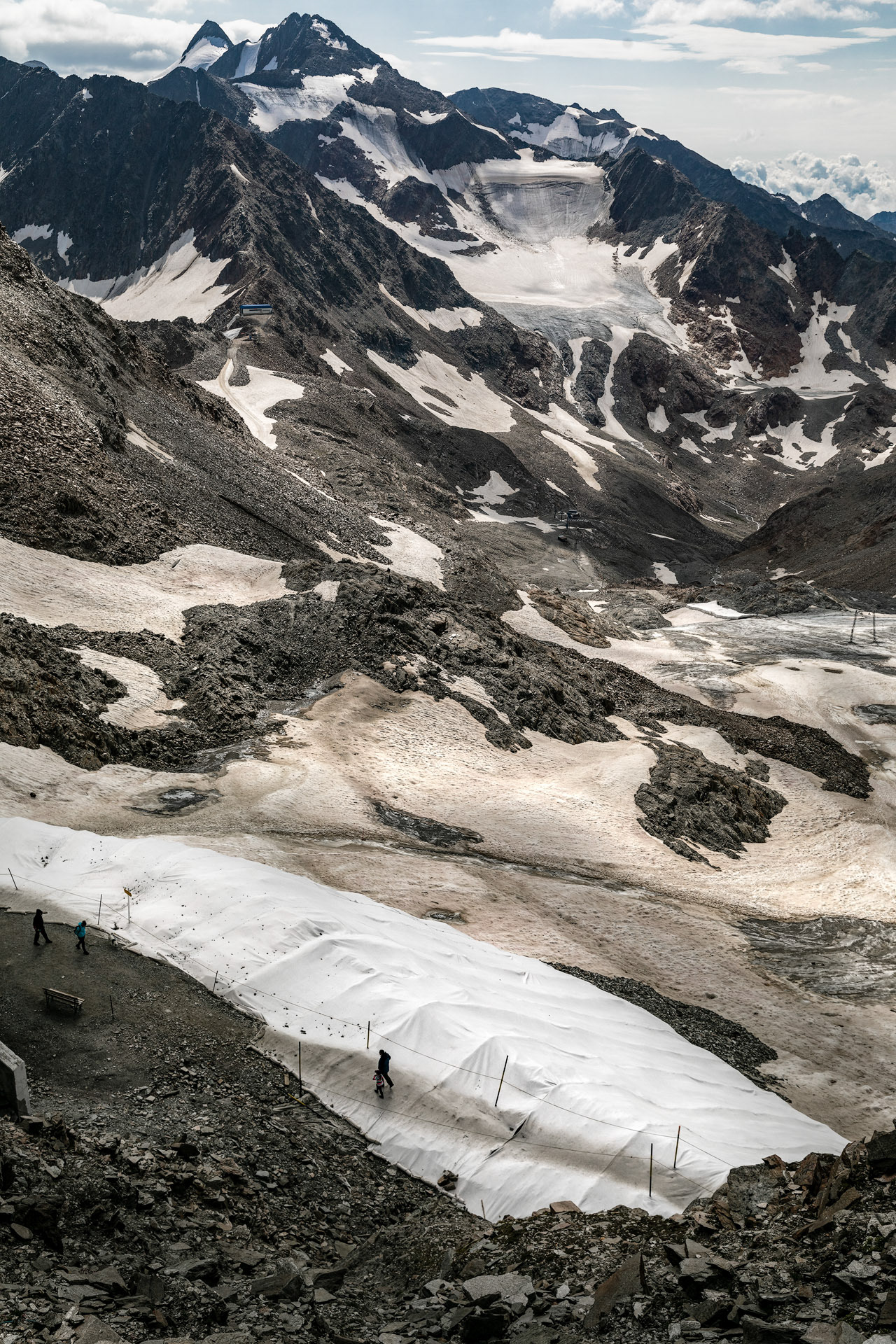 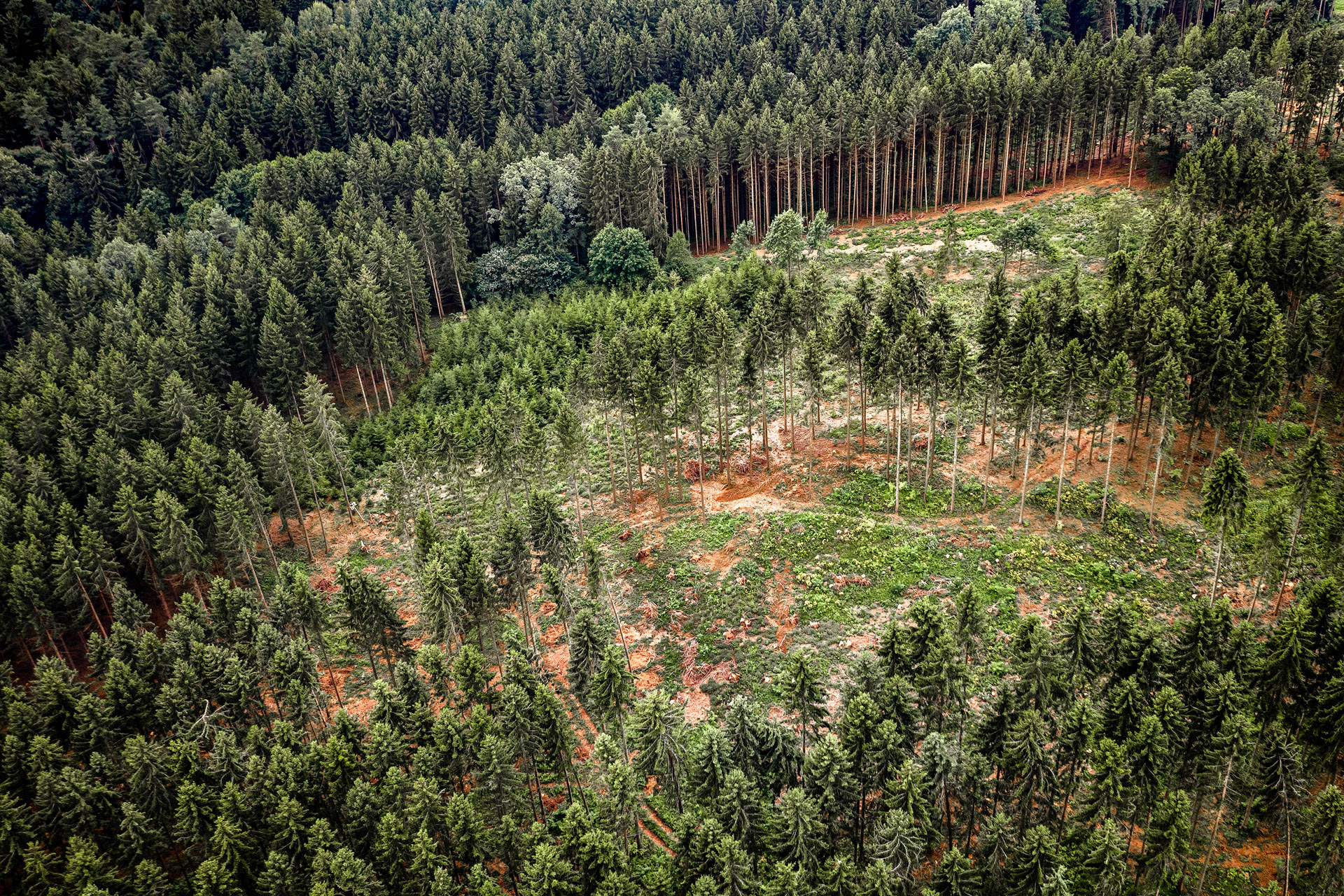 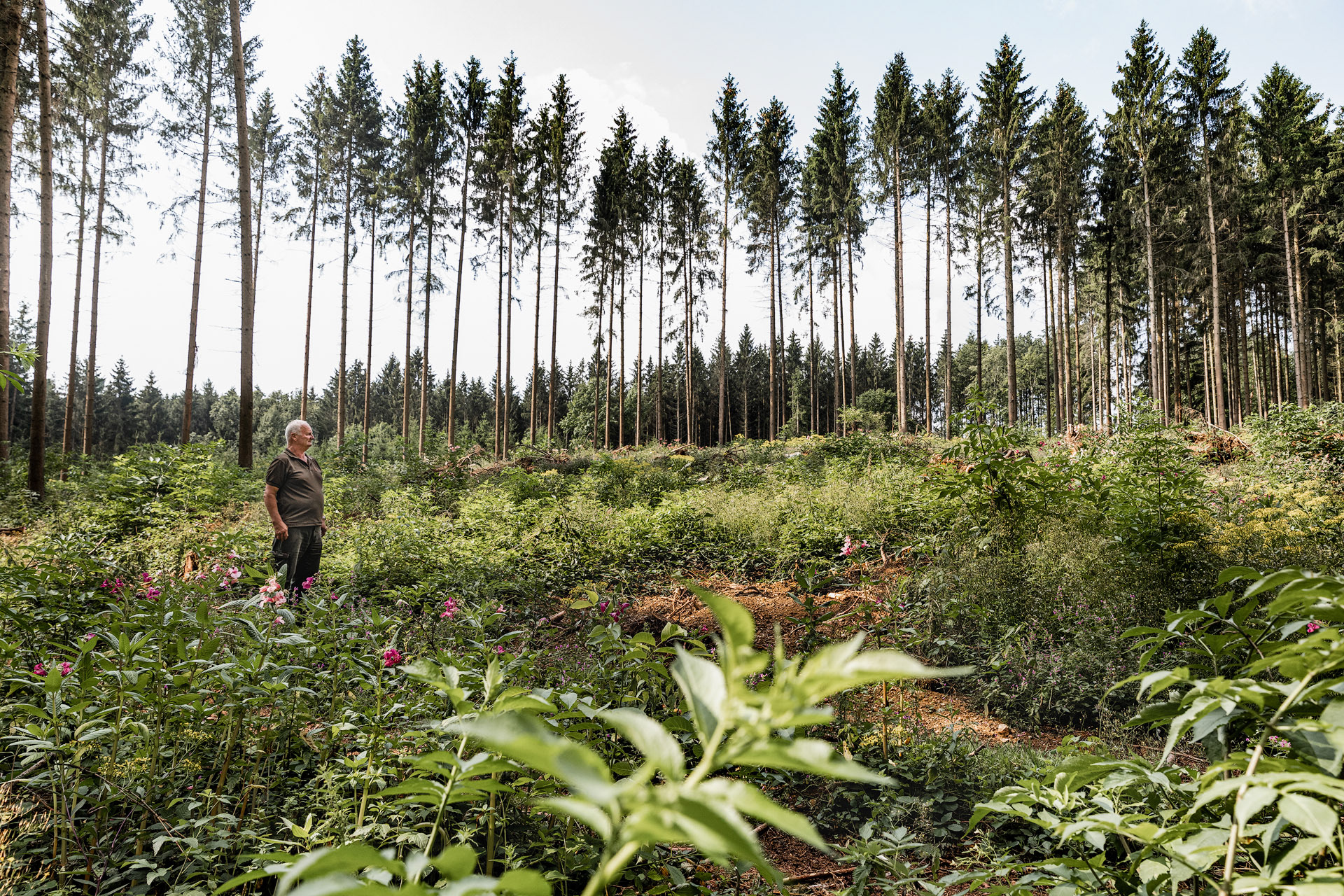 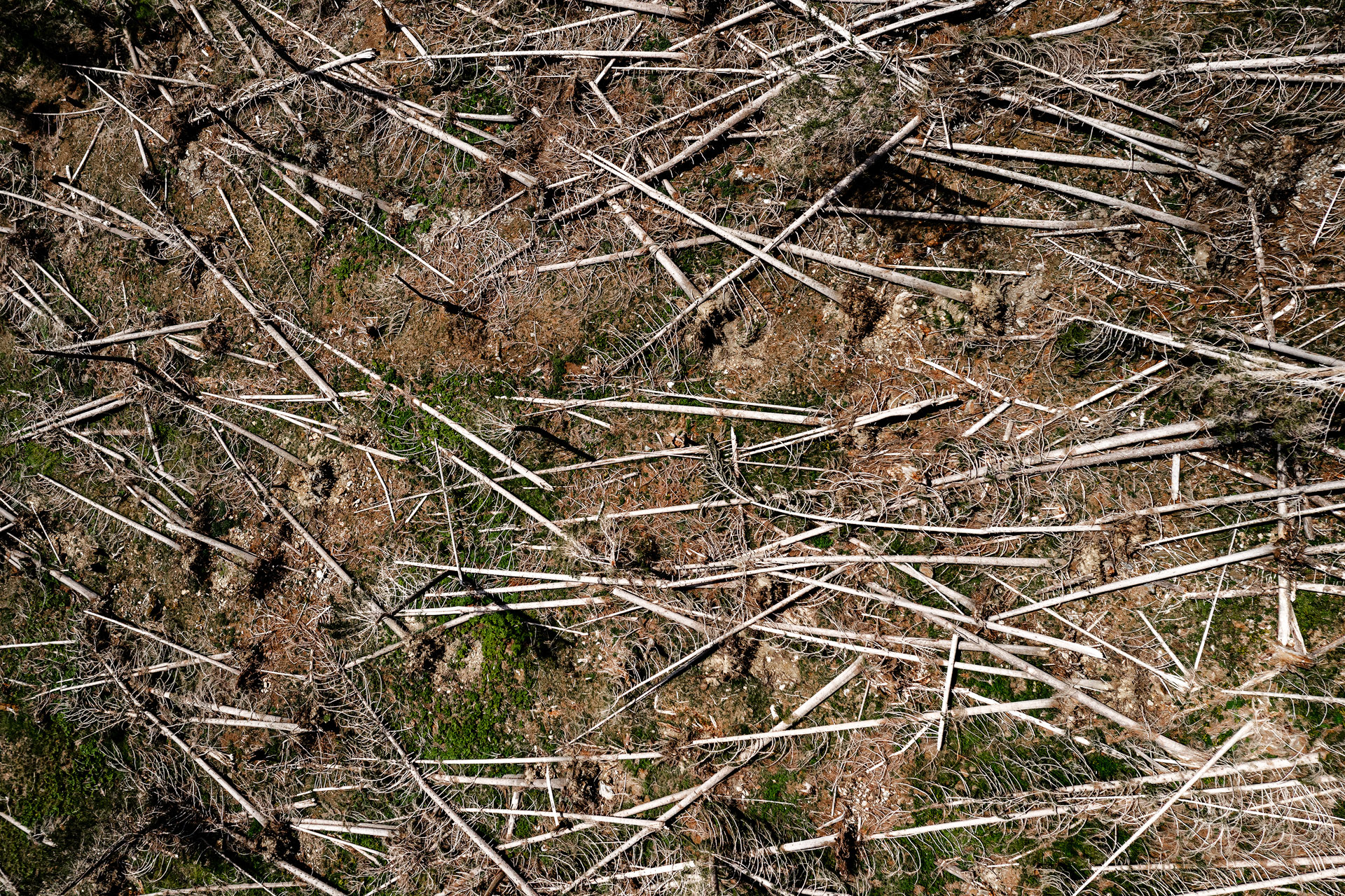 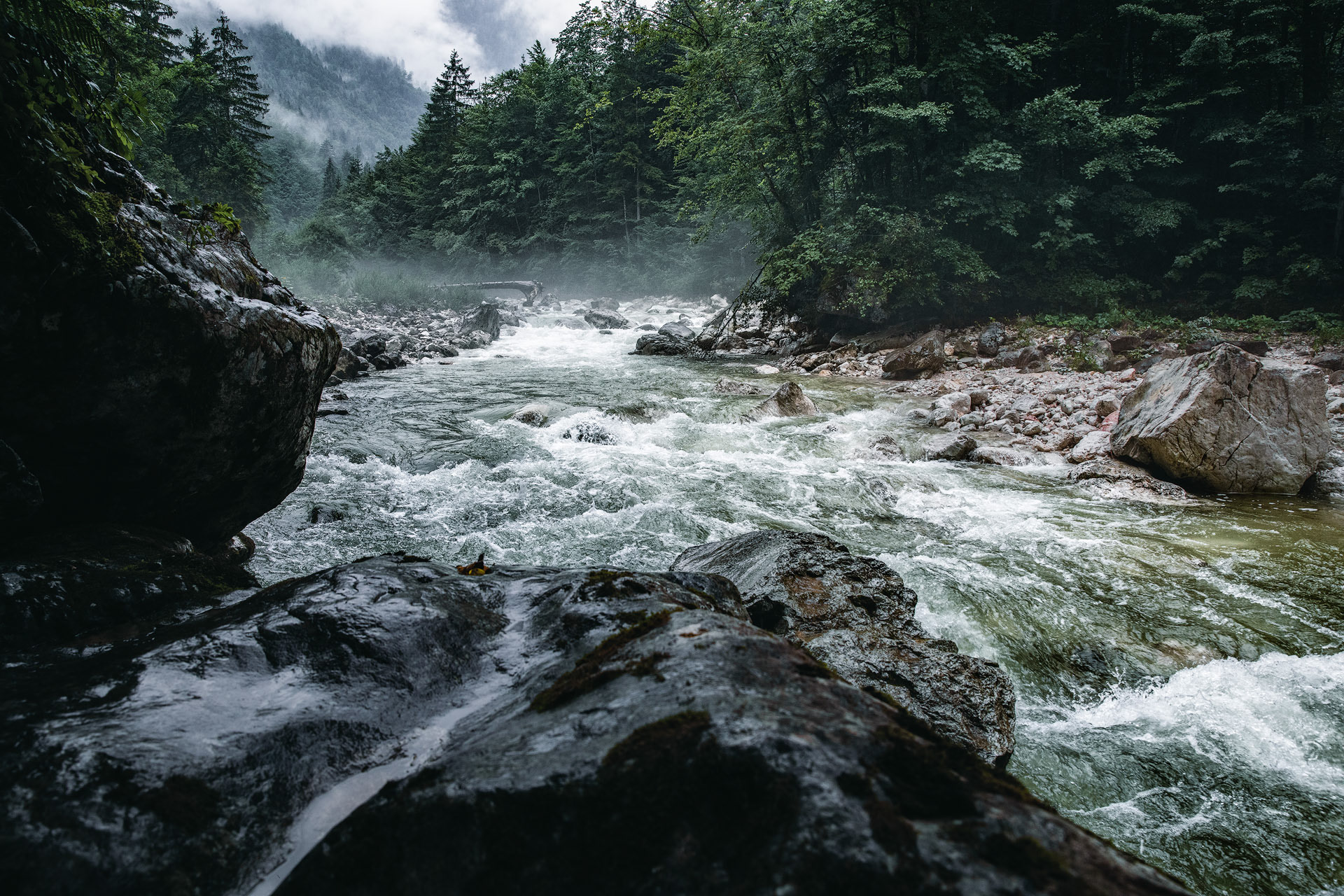 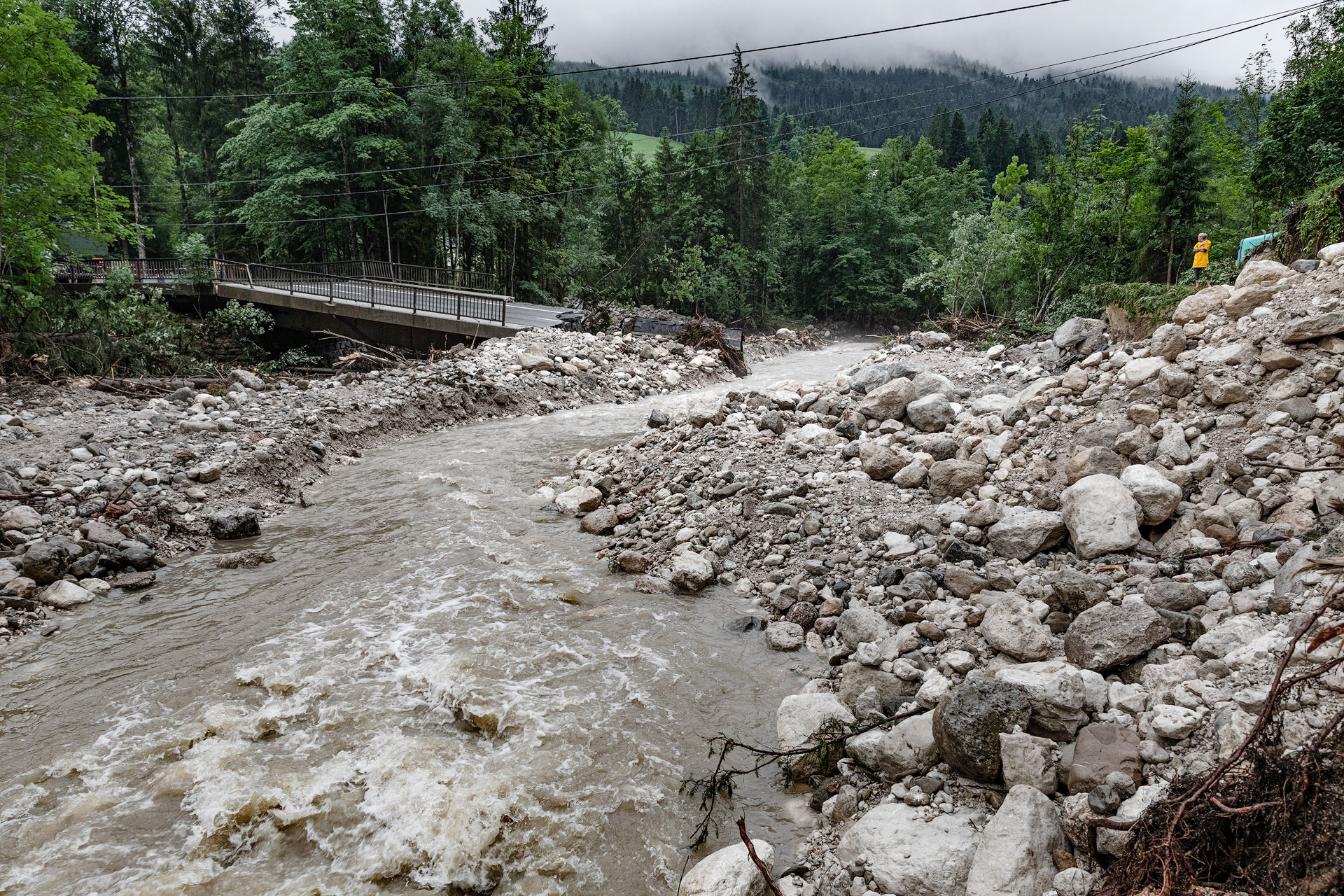 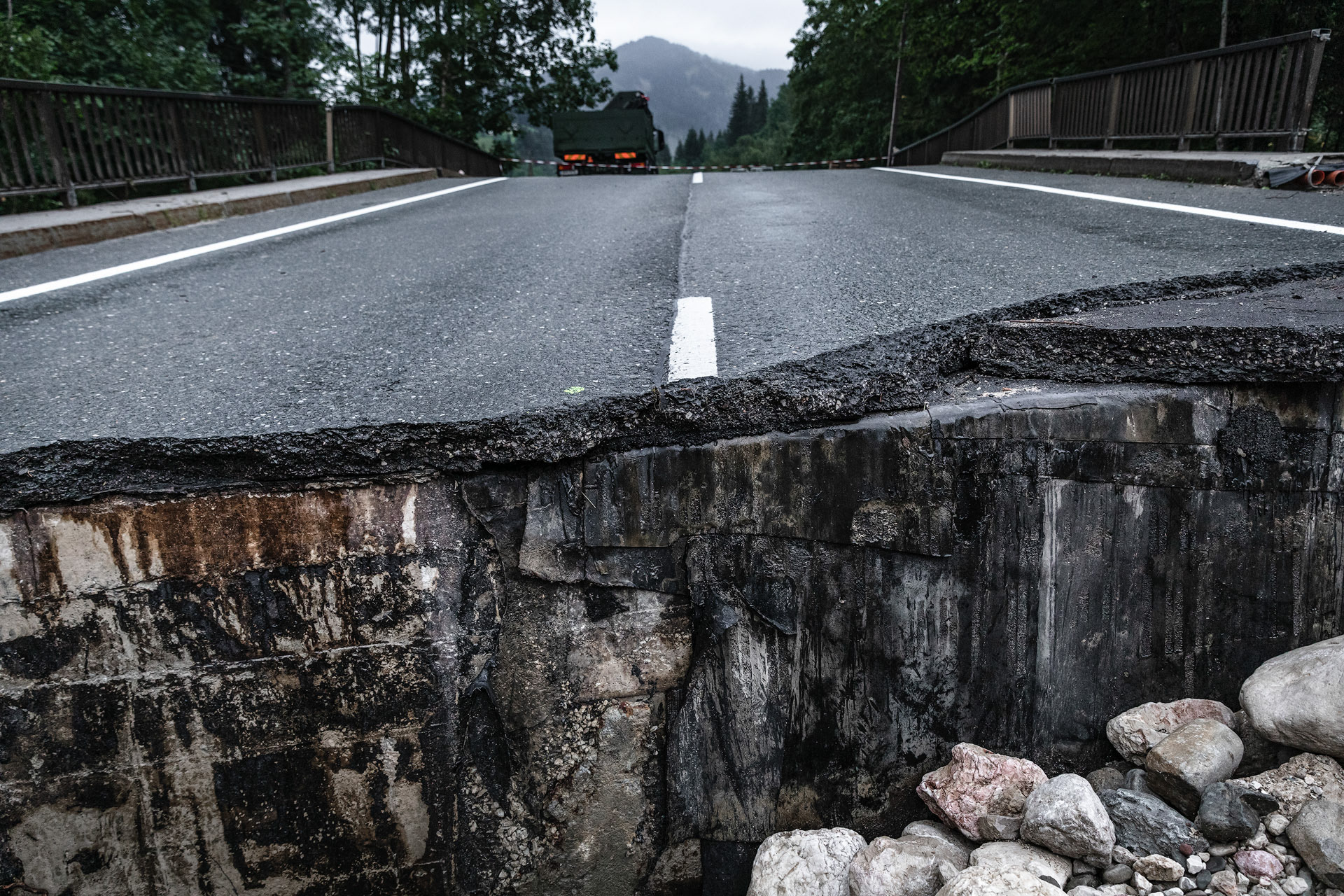 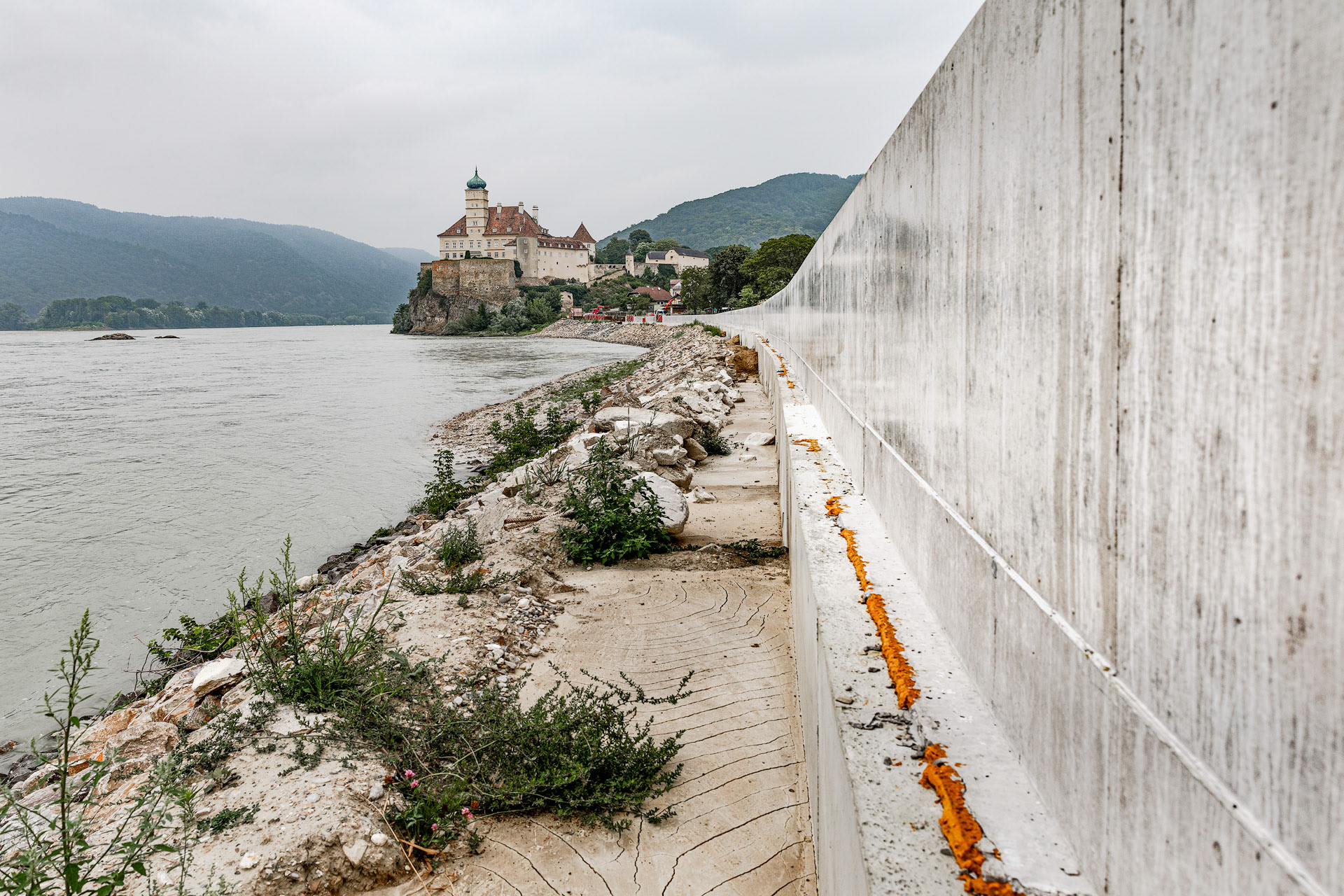 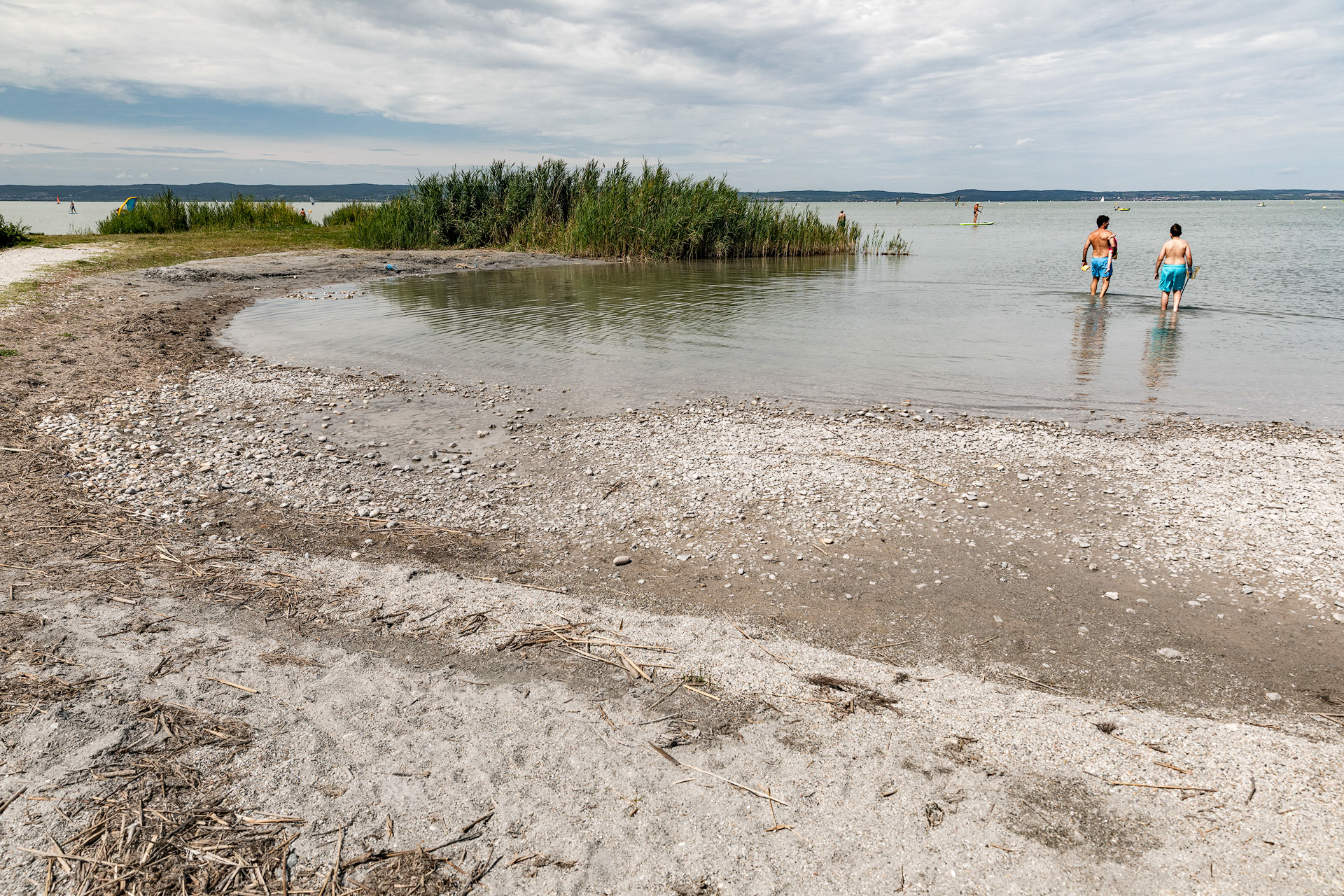 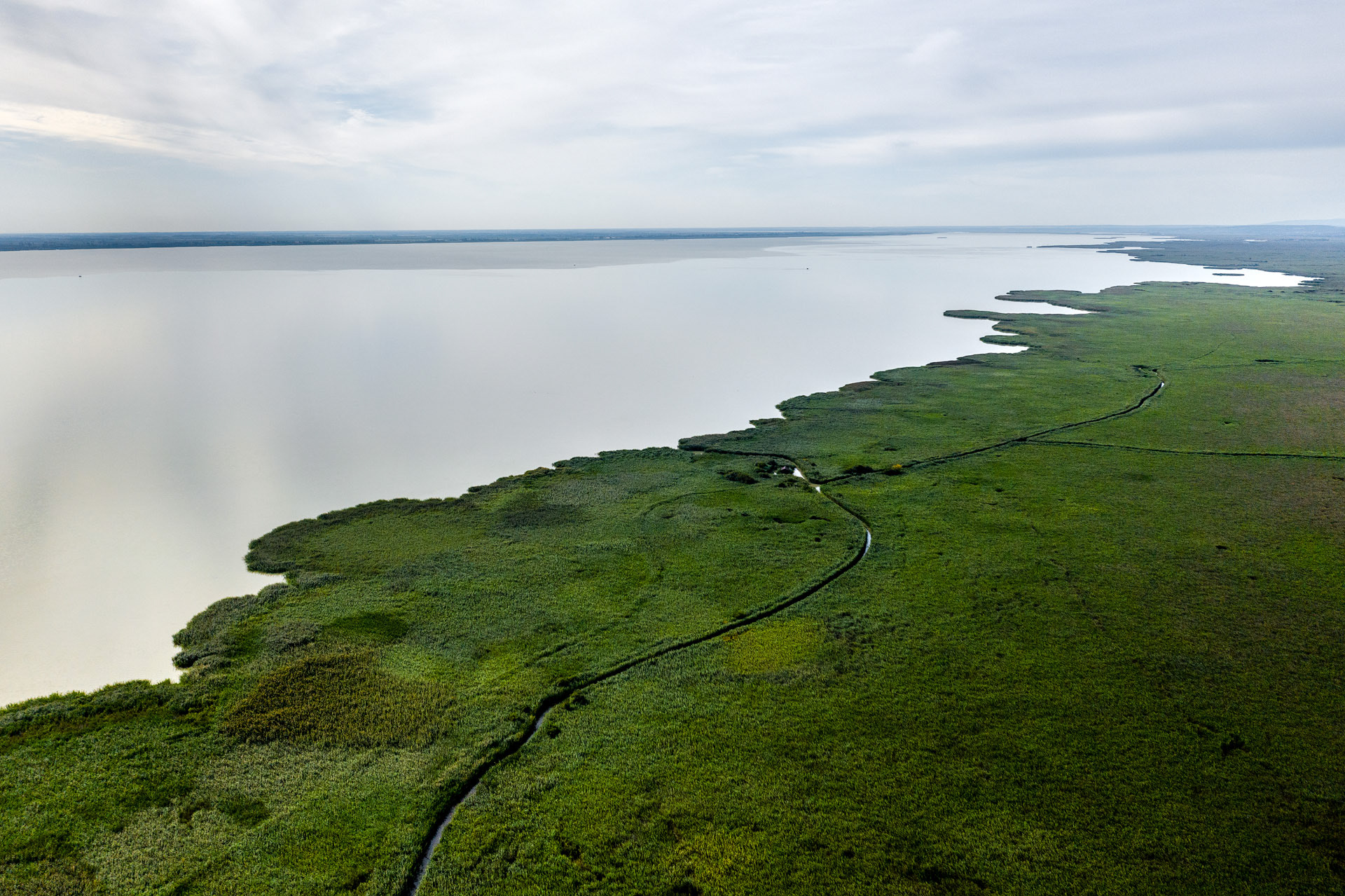 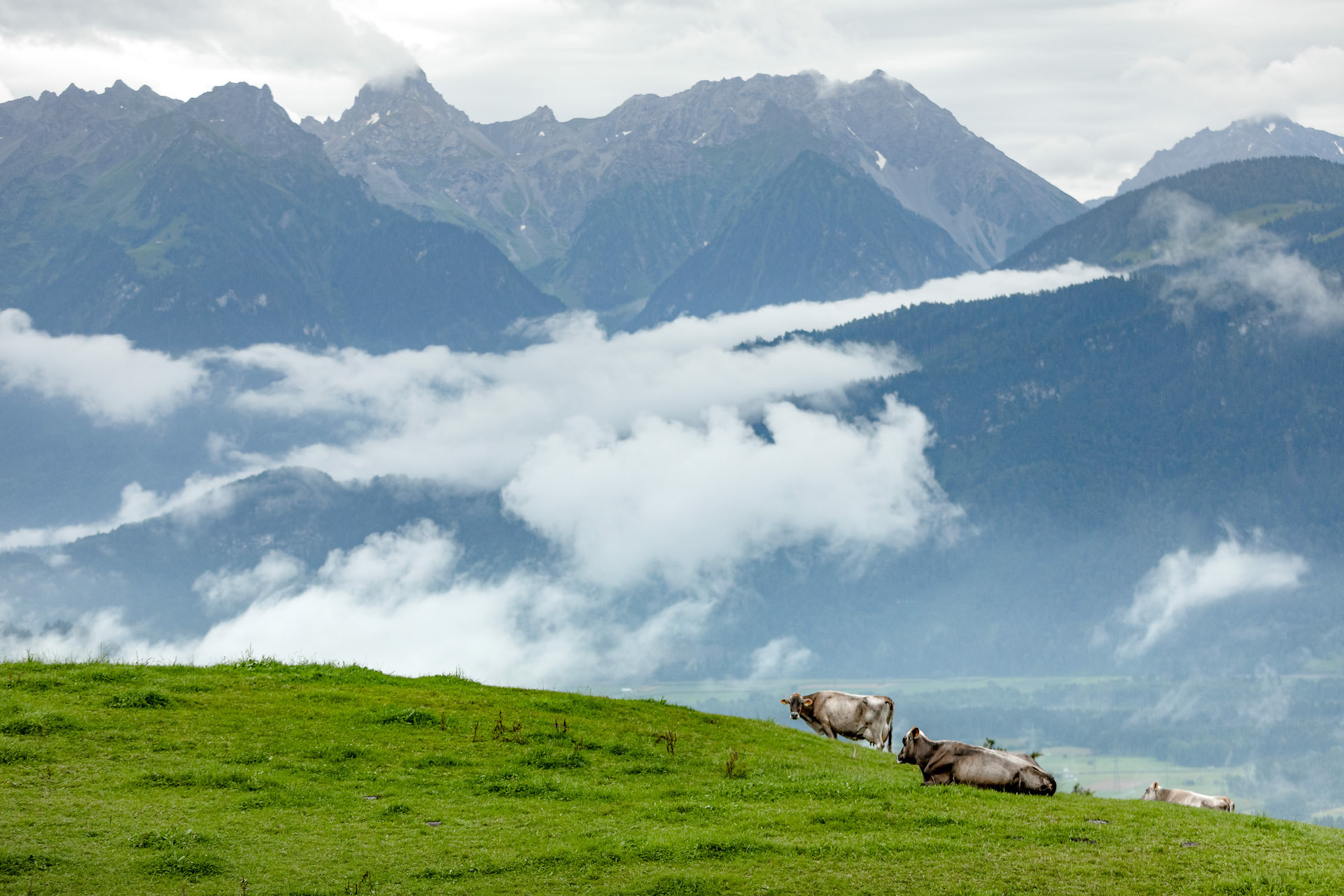 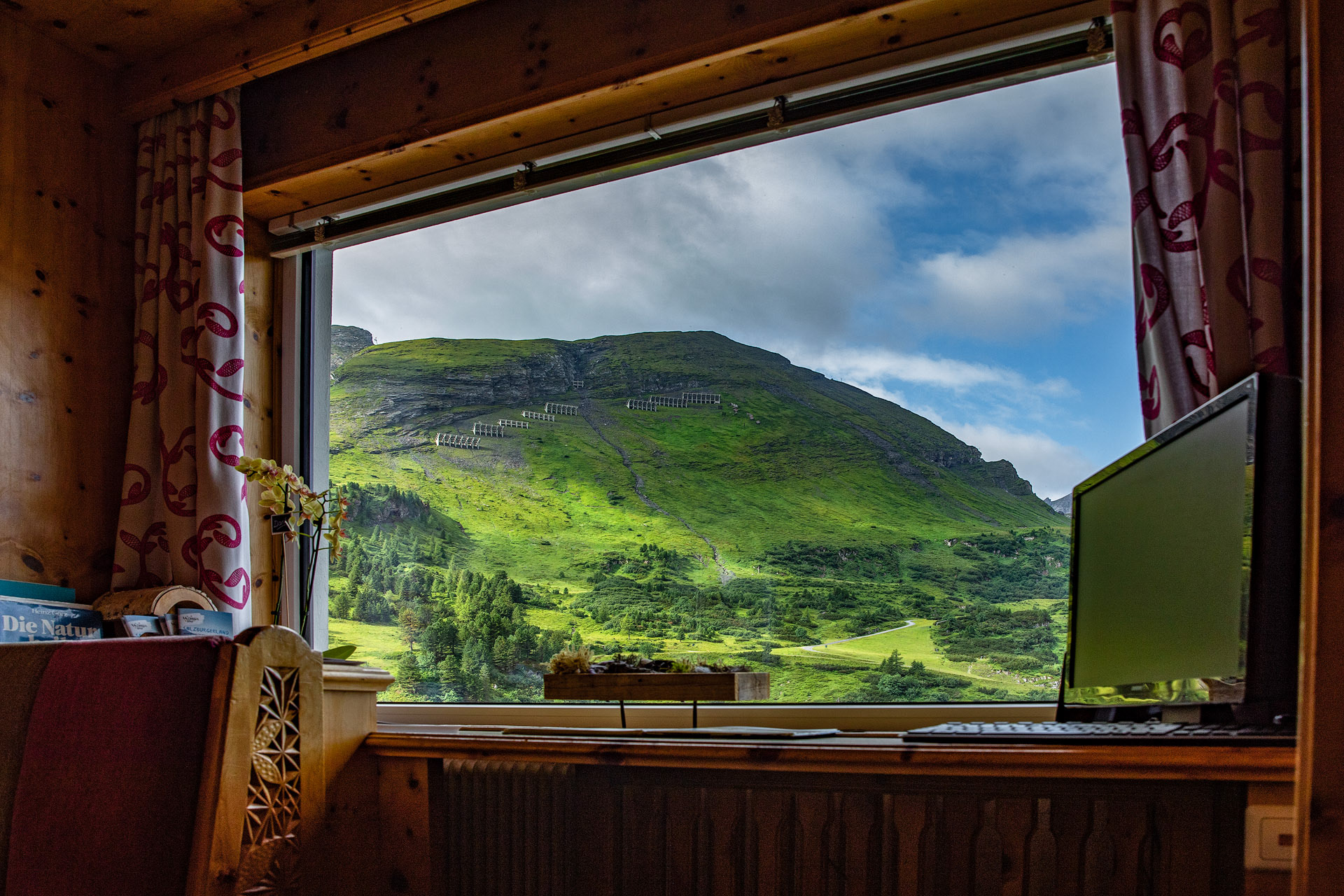 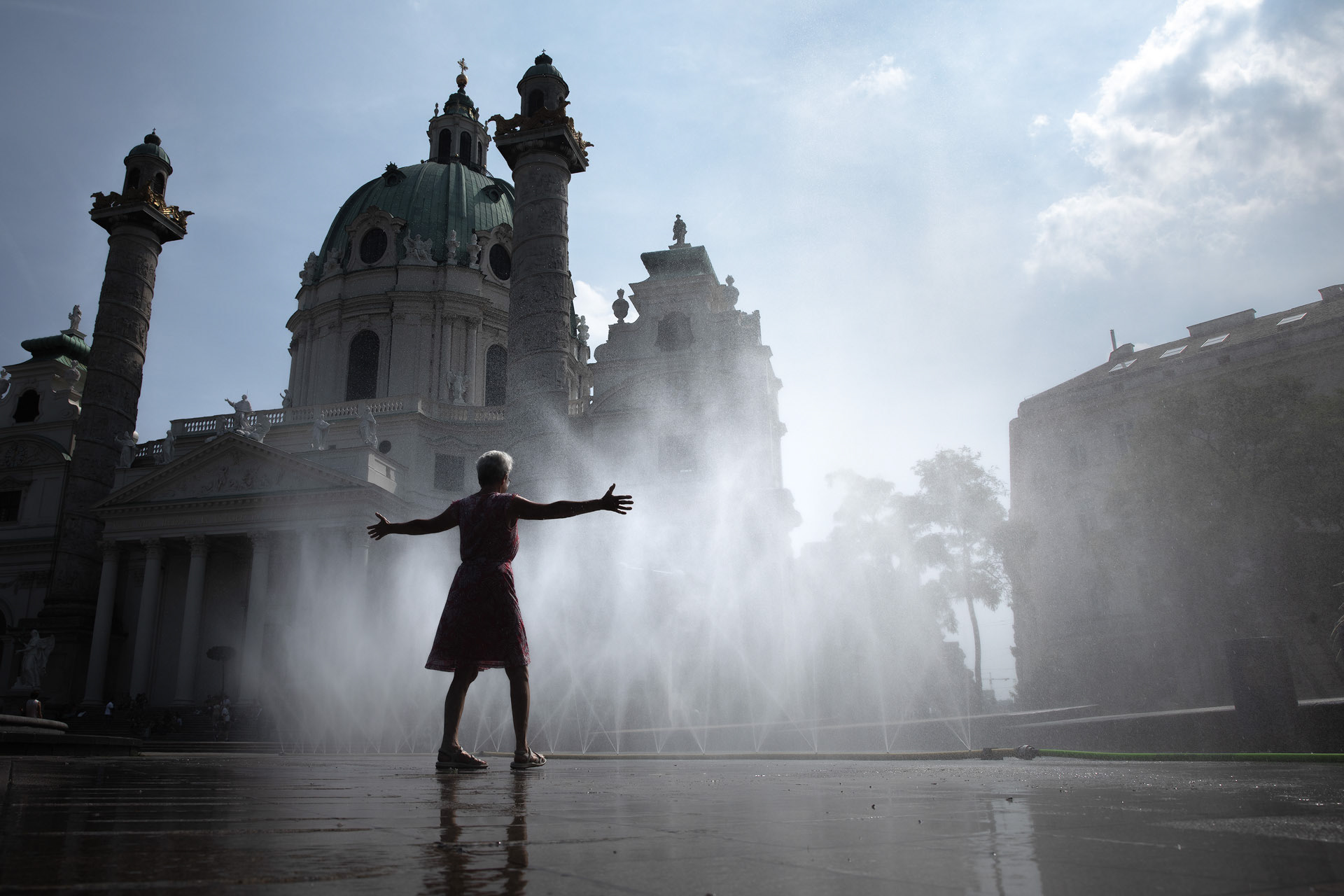 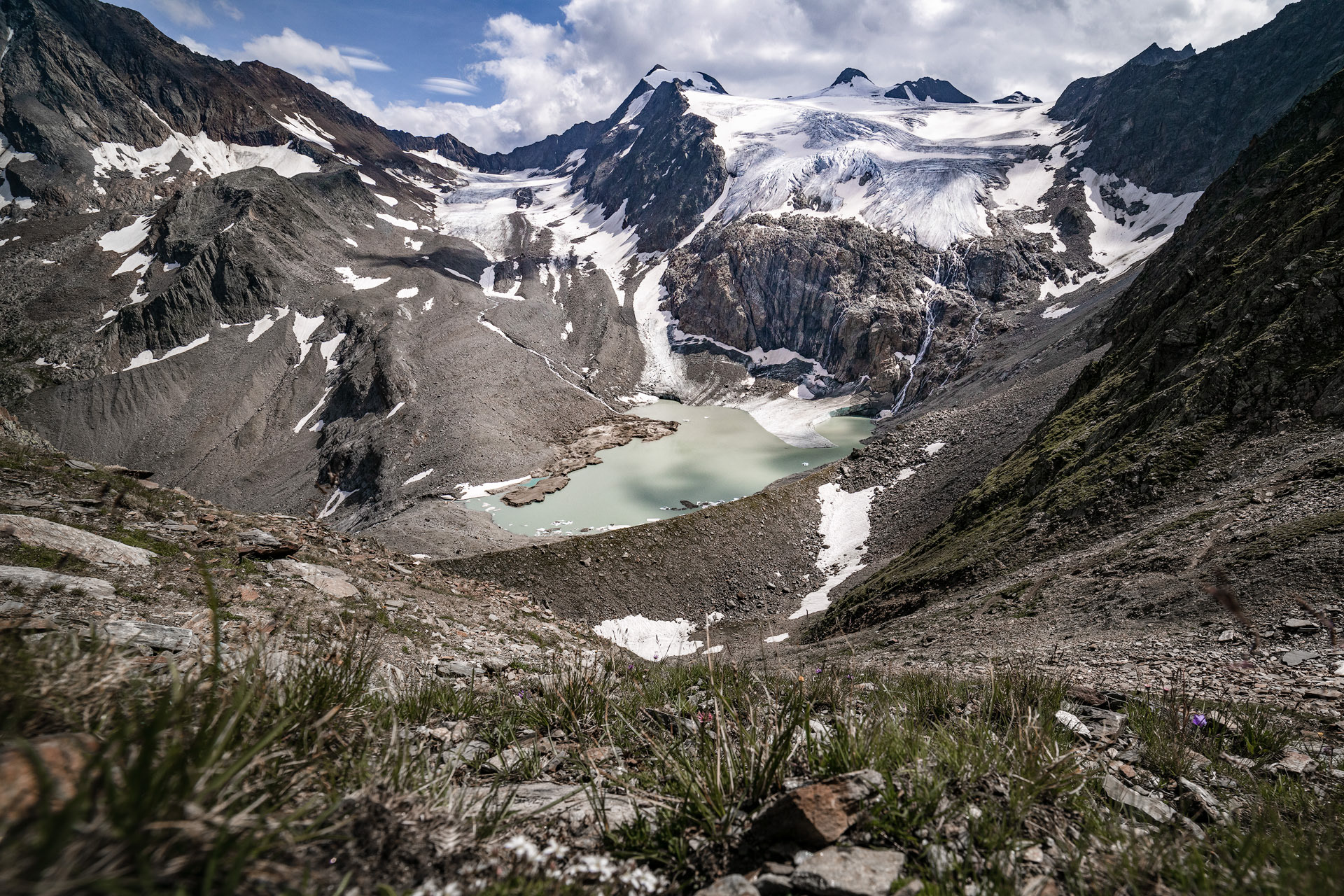 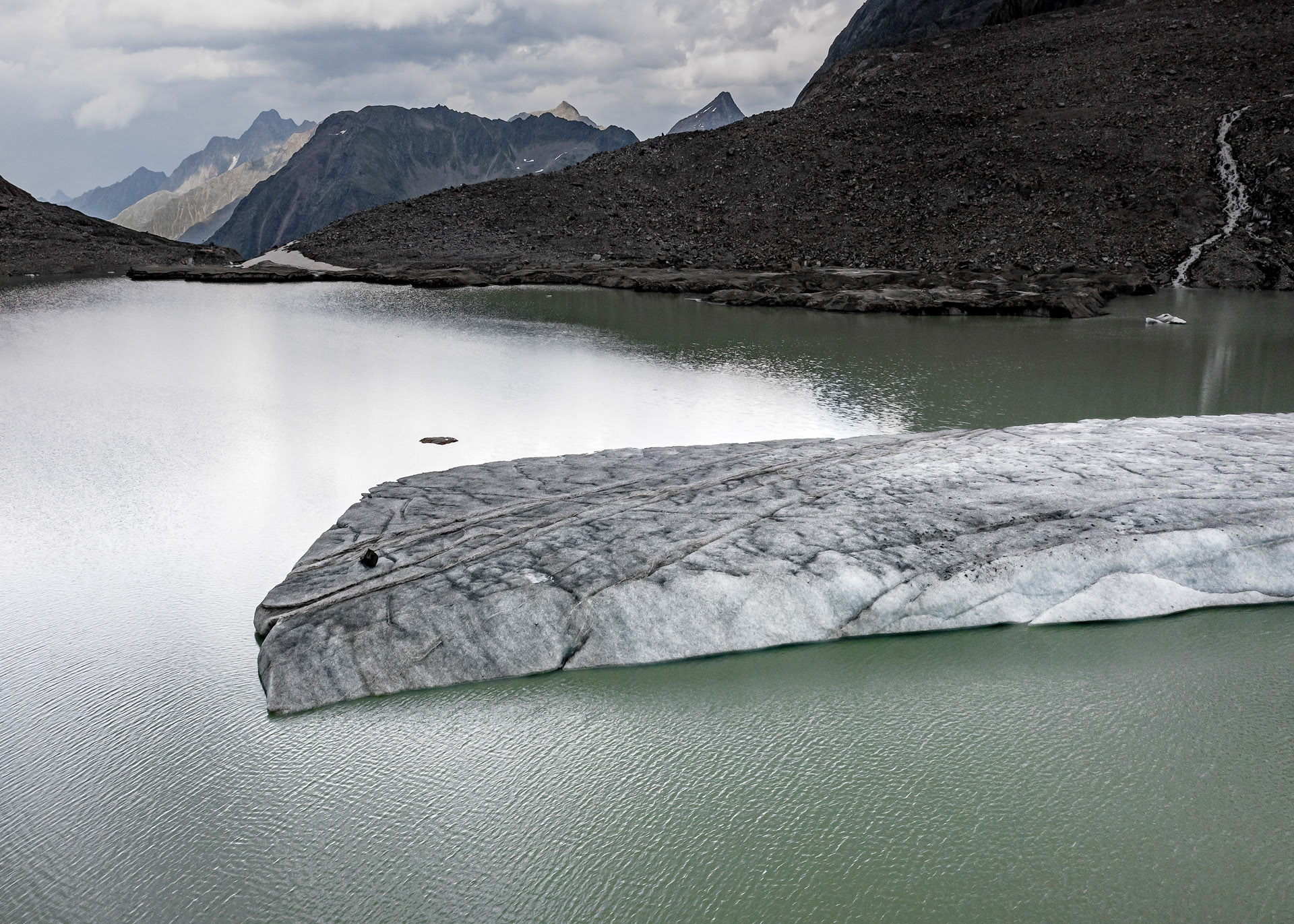 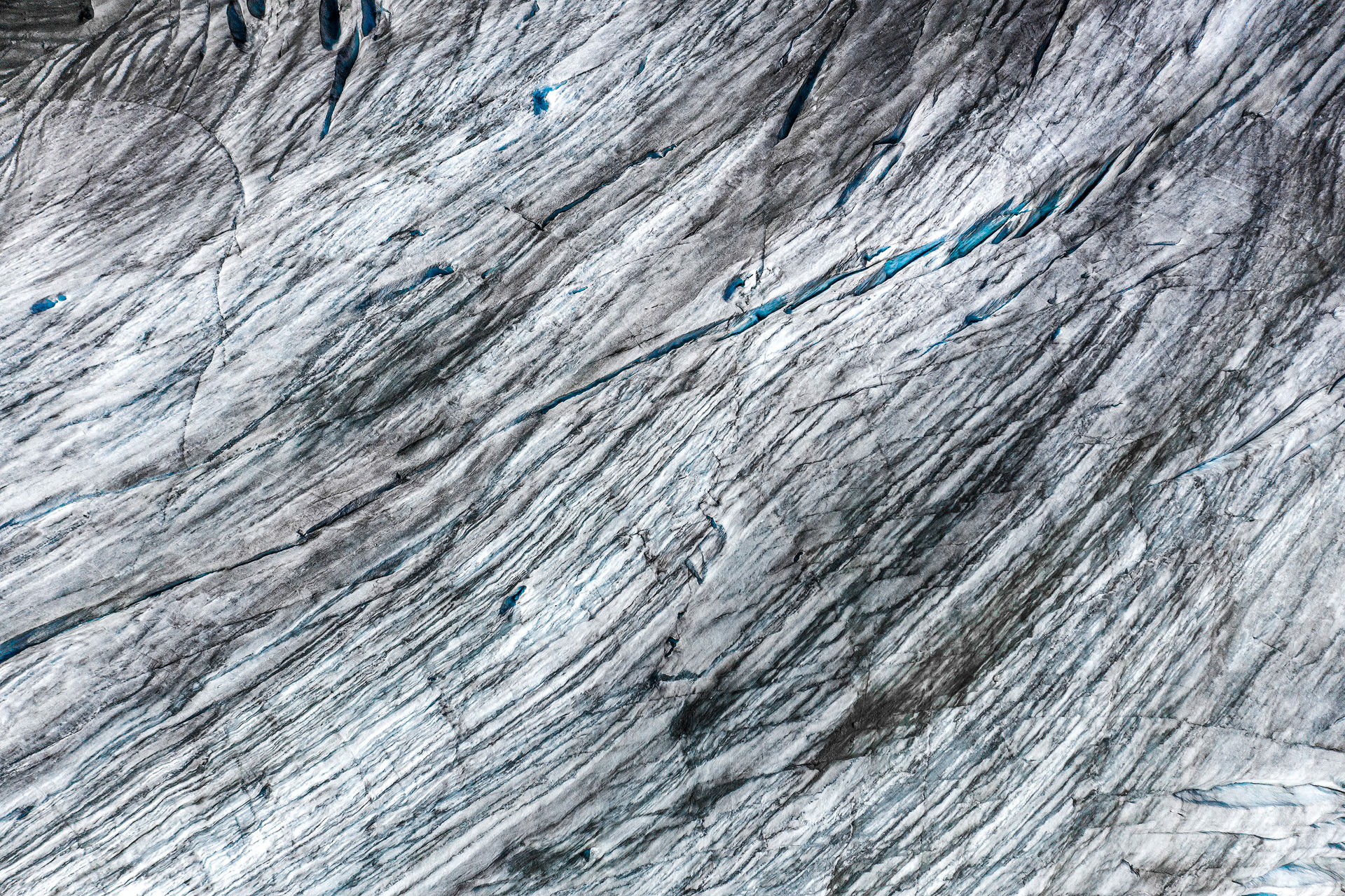 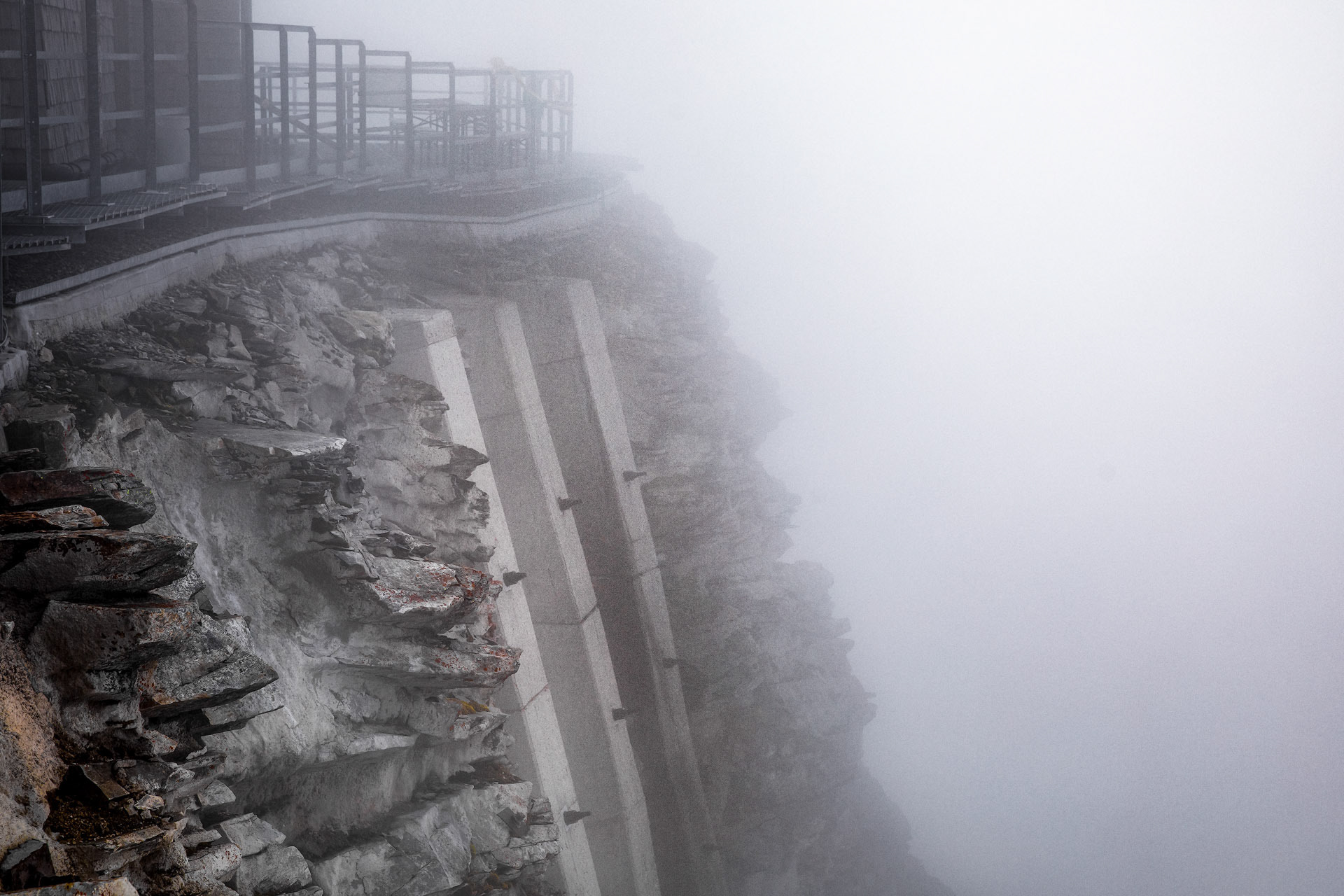 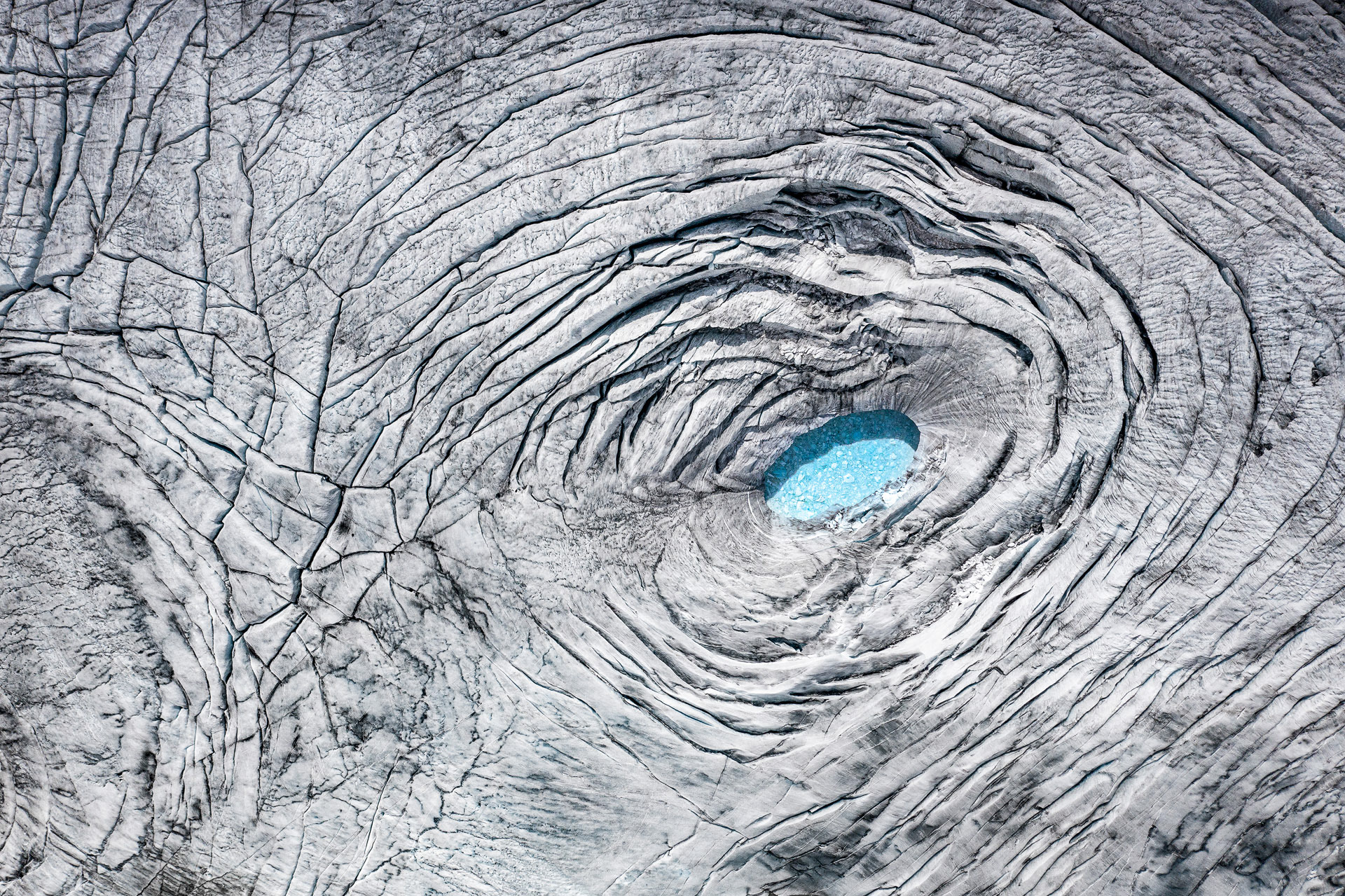 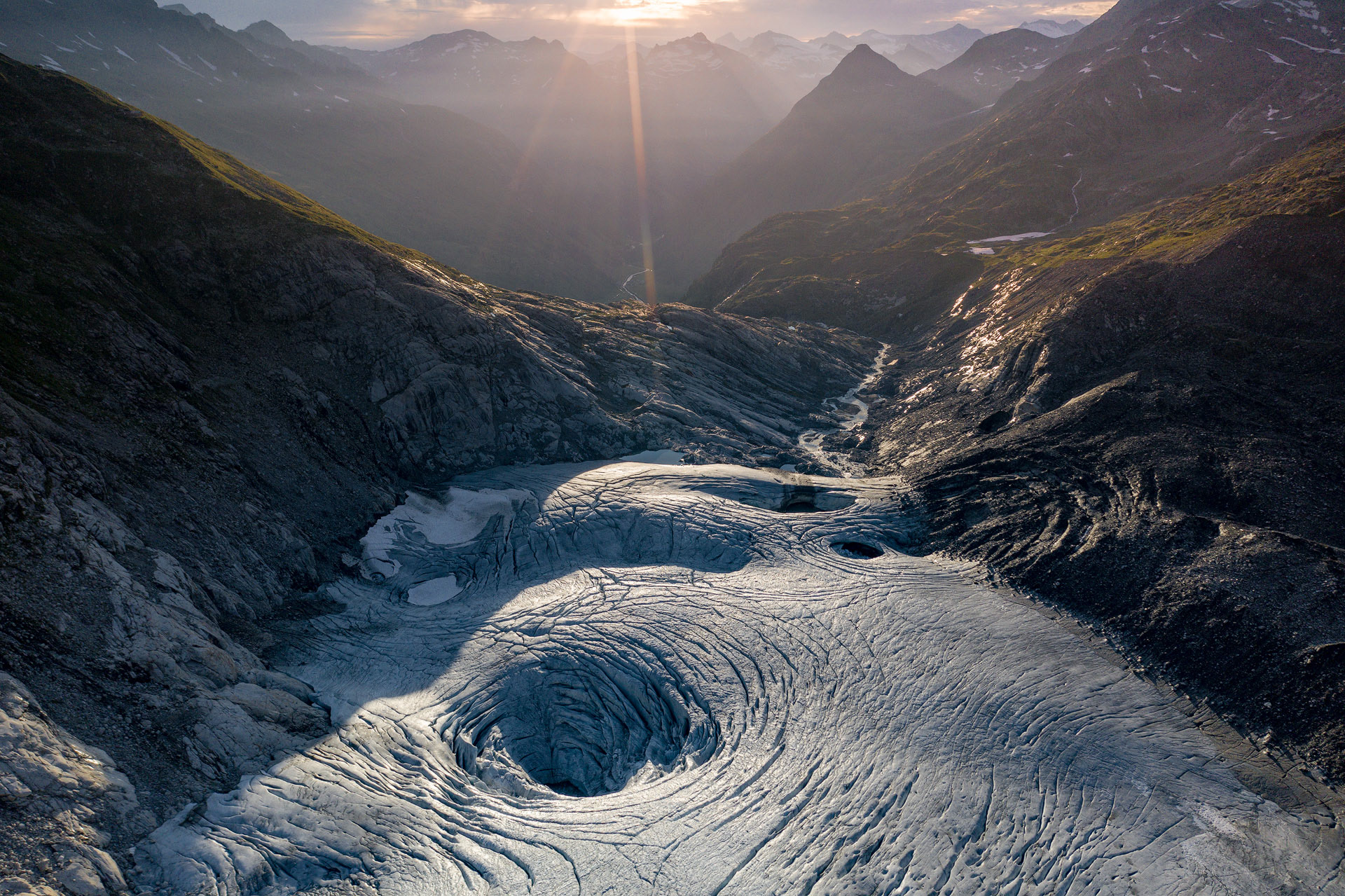